The Milstein Sanctuary, dedicated during Chanukah 2000, i 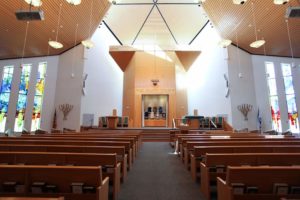 The words of Torah embedded in the illuminated glass convey a central Jewish idea — that words create worlds. Sitting in the sanctuary, we remind ourselves of this creative power of words in a place of prayer, since when we pray, we use words to repair our inner worlds; the words on the windows remind us to listen to the words that inspire us to repair the outer world.

The stained glass windows were designed by Jean-Jacques Duval and crafted by Rohlf Stained & Leaded Glass in Mount Vernon, New York. The architect of the Milstein Sanctuary was Gruzen Samton.

The Ark has a Hebrew inscription overhead from Psalm 36: “By Your light do we see light.” High up over the Ark is the Hebrew inscription from Exodus 25, the words of God to Moses when the Israelites were preparing to build the very first sanctuary: “Let them build Me a sacred space, that I may dwell among them.”

The ner tamid (eternal light) that hangs above the Ark is an adaptation of a design found in a nineteenth-century synagogue in Bombay, India.

On either side of the bimah are menorahs that were designed for our prior sanctuary by the late Ludwig Yehuda Wolpert, former director of the Tobe Pascher Workshop at the Jewish Museum in New York.

The pews were crafted to our design at Kibbutz Lavi in Israel. 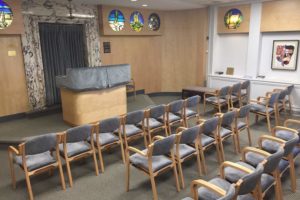 The Irene Schwebel Chapel was a gift from M. Mac Schwebel in memory of his wife. Recently refurbished, the chapel houses morning and evening minyanim and is often used for education programs.

The needlepoint chuppah hanging on the chapel’s wall was a gift to the synagogue from the Mr. and Mrs. Club in 1974. It was designed by Marge Sablow and dedicated in memory of her father. This beautiful needlepoint was hand-worked by a dozen congregants of Temple Israel Center. The piece contains a quotation from the seven blessings, or sheva berakhot, that originally formed a three-part valence around the floral square, under which the bride and groom were married. The calligraphy of the quotation was printed by Sylvia Wolff. The chuppah fell into disuse, and in the tradition of “pious recycling,” the precious fabric was rehung in the Irene Schwebel Chapel.

The ner tamid originally came from 19th century Germany. In Germany, this type of lamp was called a judenstern, or Jewish star, because it cast a star-shaped shadow. A Jewish family would lower the lamp on Friday night and use it as the Sabbath light. Originally an oil lamp, it was later electrified and first brought to Temple Israel Center in the 1950s.